Geelong is a city located in the southwest of Melbourne. As one of Australia's largest urban centres, its filled with new developments, businesses and plenty of things to do. Taking a helicopter flight or a plane ride from Melbourne to Geelong is one of the fastest ways to travel to the city.

Whether you're looking for a quick way to get from Melbourne to Geelong, or you're interested in taking in the sights of Victoria from above, a helicopter or plane flight is sure to exceed your expectations.

If you are travelling to Geelong for leisure, we recommend you to learn more about our winery tours to the Bellarine Peninsula. We have partnered with popular wineries in the region such as Jack Rabbit, Clyde Park Estate and Terindah Estate to offer unique winery tour packages.

As there are no passenger flights from Melbourne to Geelong, a private charter service is the most convenient way to travel to Geelong.

Due to the nature of helicopter and plane charter flights, a one-way journey to Geelong from Melbourne is likely to be similar in price to a return journey as the aircraft will need to return to Melbourne.

Key Benefits of Helicopter Rides and Charter Flights to Geelong

If you'd like to take a private flight from Melbourne to Geelong, request a private charter below.

Private charter destinations in Victoria include:

Our destinations include Phillip Island, Yarra Valley, Bellarine Peninsula and the 12 Apostles. All-Day Adventures including the 12 Apostles Let customers speak for us

Ed gave us the warmest welcome as soon as we met. He made us feel very comfortable for our first flight and was passionate about his work (which we loved). Loved his stories, his helicopter and this experience! What an incredible trip we had. Definitely recommend this. Don’t even think about it, just book it. You won’t have any regrets – I can promise you that. 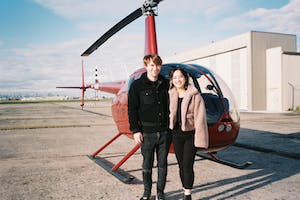 Our helicopter tour was a beautiful tour of Melbourne. Our pilot gave significant amount of knowledge throughout the tour, explaining the various scenic views/ locations and allowed for photo opportunities.
Highly recommend. 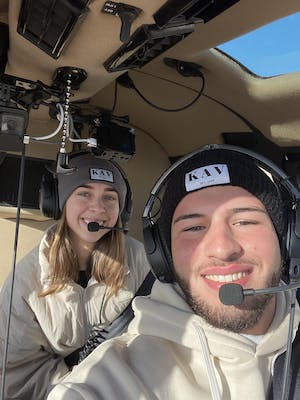 Terrific service from Ed, great quality chopper, informative flight….Levantine hill is a beautiful property and the food and wine is exquisite.
A fun trip home with Ed dodging the rain! 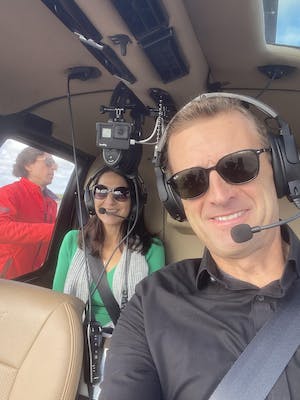 Our adventure with Ed was absolutely incredible!! We flew to Zonzo estate for a decadent lunch then on to St Hubert’s for dessert. The views of the city on the way back from the wineries was stunning- seeing the bay from above was truly something else. Highly recommend for anyone wanting an unforgettable experience and Ed was the perfect host and pilot. 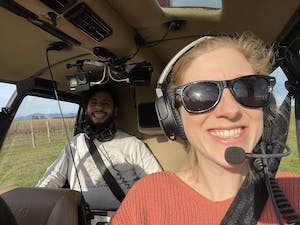 Our Pilot Ed was amazing, told us where we had to look, has the best ever morning, the flight was originally for My Grandson Thomas and My Husband for their Birthdays, but told us there was a spare seat so I jumped at the chance of seeing my Beautiful Melbourne, it was a spectacular Morning with the weather and my 2 Favourite Boys, Thanks for a Wonderful Opportunity..It was Better Than my 1st Helicopter Flight over the Grand Canyon!! 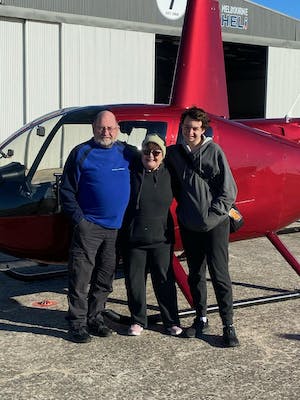 Ed is an absolute legend! His personality and pilot skills are exceptional. Being our first time in a helicopter (Thanks to our 4 children for the X-Mas voucher) we didn’t know what to expect.. harmony, excitement, relaxation, & views that can’t be experienced in any other way. We wish you pure abundance with this adventure of yours Ed! We will be seeing you again!! 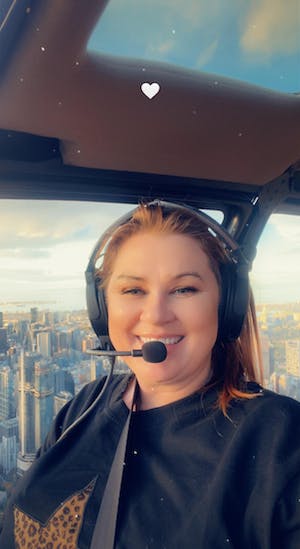 From first communication to last, Rotor One have been absolutely outstanding; going the extra mile to make both my partners and my special day (Engagement) one of the most memorable times in our lives.

I called a number of providers but ultimately went with Rotor One after having great chats with Eddie, who was clear, trustworthy and transparent. Eddie helped by walking me through the offerings for my engagement, all the while keeping it a secret from my partner.

I opted for the engagement package which was very reasonably priced, it included 30+ minutes in the air, circling the outskirts of the city, the St Kilda and Brighton Beaches, back across the MCG / Tennis Arena and then across towards the beaches of Altona where his team had organised a 50+ ft banner which was sprawled across the land right near the beach. We did a couple of passes and I proposed to my partner who was in shock - all the while Eddie was able to keep me in the loop with timings and locations via radio signals; unbeknownst to my partner.

We landed back at hanger 7, where champagne and a photographer were also on the tarmac waiting for us.

It was a perfect day, one I will never forget - I couldn't recommend the team at Rotor One any higher and both my partner and I will be back for more tours soon!

Helicopter Proposal with Giant "Marry Me" Sign (The Ultimate Statement) 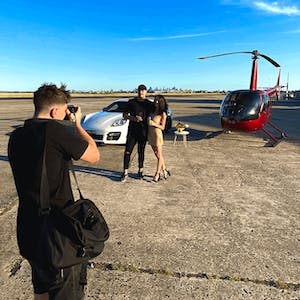 I surprised my bff with his dream coptor rode and not only was it exciting, it was breathtaking.
Seeing Melbourne like that's going to stay with me for this lifetime.
The city and beaches flight is breathtaking 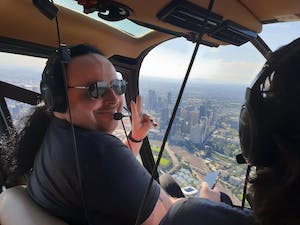 This is my second time flying with Rotor One - during the first scenic flight the pilot told me about the winery’s you could go to for lunch! So we booked in to visit Levantine Hill. I cannot believe how quickly you can get out of city, literally land on a vineyard, have lunch and be back in Melbourne for a timely dinner! So much easier than driving especially while wine tasting! The team is magnificent, are really informative and fill you in on the interesting points of the region and the helicopter itself - much more pleasant than driving yourself out to the countryside. We will be back for more. 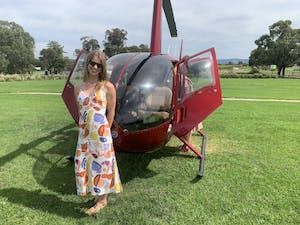 Our pilot Ed was a consummate professional, communication with the company was great and our day trip couldn’t have been better. Thanks all, we will be back. 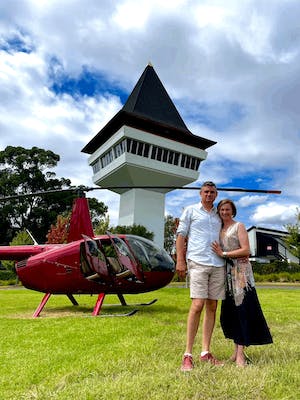 Got this as a gift for our wedding anniversary. We enjoyed every moment of the helicopter ride. Our pilot Ed was super friendly and professional. Would definitely recommend! 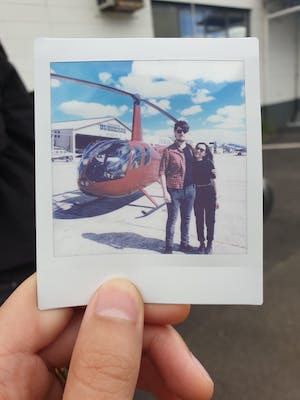 What a glorious end to 2021 this has been. As you do with all bookings, things went bad - from out of hand circumstances- that had us rebook and rescheduele and Ed was more than understanding about everything from the beginning. Anyhow, we made it through to our booking time finally and we were welcomed with warmth from Ed personally who showed us around and then took us to the great scenic and beach route for 30 minutes. Ed is to die for. He is just light with his humor yet doesnt make the silence awkward at all by asking or remarking every now and then on what we would be passing through making the whole ride just amazing.

We have also criscned the baby Leo to the now known Linda who was kind enough to hold us in her belly during that time.

Ed is just a natural and is just right and Im glad I have flown with him as I aint never flying with anyone else but him.

PS: that picture uploaded was a complimentary print out from Ed just before I left which I think was a great thing to do :) 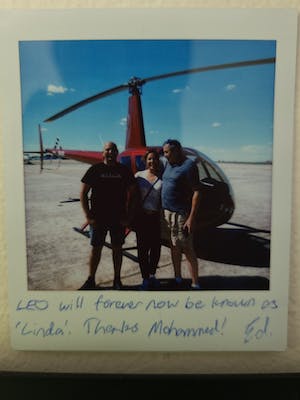 Every Christmas we organise a family adventure to create long lasting memories for our kids. This year we chose Rotor One to provide our Christmas thrills! Our very friendly pilot Ed was fantastic and ensured our experience was super enjoyable. His personable nature and informative approach really enhanced our time soaring over Melbourne while enjoying incredible views of Melbourne's land marks. Highly recommended experience for just about anyone. Thank you Rotor One! 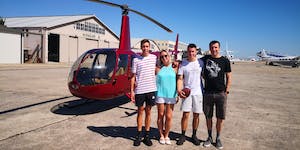 Our experience with Rotor One was flawless. Our pilot Ed made the experience incredibly enjoyable! The helicopter ride took us over the Yarra Valley to Meletos winery. We had incredibly views and arrived 20 metres from the restaurant like rockstars! 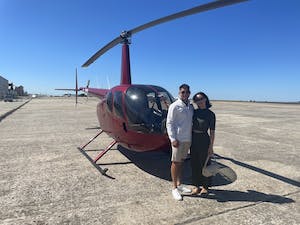 The Ultimate Guide to Helicopter Wine Tours in Yarra Valley

5 AWESOME Things To Do in Melbourne this Weekend